Sunrise for the re-use of ePSI ? The day of the ePSIplus Thematic Workshop in Copenhagen
After the presentation of the invited experts representing Pan-European and National Associations, National Projects the following debate issues have been discussed: ·
What are the top issues that have arisen from the Association presentations and how best should these be addressed?
· What is the best approach to encourage and then support PSI re-use entrepreneurs?
· What is the best way to maximize the impact of the Associations efforts at the pan European level?
· What is the best approach to reconcile differing views on PSI Re-use within and across Associations?
· Who are the Champions within Europe with respect to PSI Re-use?
All the presentations will be available on the official website http://www.epsiplus.net/ on tomorrow!
Please visit it and register for the free of charge Newsletter issued in every 3-4 months.
A news item has also been posted to ePSIplus that enables one to link to the event page. The News URL is:
http://www.epsiplus.net/epsiplus/news/copenhagen_hosts_associations
Conclusions of another ePSIplus meetings are available at
http://www.epsiplus.net/epsiplus/news/pricing_meeting_report_published
"Please keep an eye on the Copenhagen meeting event page as further material will be added related to the meeting itself" was written in a follow-on letter by the organisers Chris Corbin, Gerhard Wagner and Olga McHenry, all Analysts for ePSIplus.
Posted by RFG at 6:33 AM No comments: Links to this post UNSDI Secretariat is expected to be operational in September

Our international SDI expert partner Jelle U. Hielkema wrote in his recent e-mail:
"... a few UNGIWG and UNSDI developments since the Co-Chair changeoever to UN-OCHA and UNHCR in April. As most of you know, in June and following a visit of the OCHA Co-Chair to FAO in May, two days of intensive teleconferencing between the outgoing Co-Chair, David Kaatrud, the new Co-Chairs, Alta Haggarty (OCHA) and Karl Steinacker (UNHCR), the Task Group Leaders and Secretariat staff took place on 7 and 8 June. The reports of these hand-over and priorities formulation discussion can be found on www.ungiwg.org under 'documents and meetings'. If these are still draft documents, the final versions should be there imminently as the deadline for comments was 24 August. The reports will give you a good flavour for where the UNSDI development process currently stands and what the priorities are between now and UNGIWG-8 in Bangkok in late November, governance options formulation and communication aspects being key elements. The other key development is that a UNSDI Secretariat is being set up in Geneva and expected to become fully operational in September. This office will be headed by Suha Ulgen of OCHA and he is assisted by Franck Albinet of UNHCR, who is already in Geneva since early June..."
For the official releases please visit the website http://www.ungiwg.org/
Posted by RFG at 9:00 PM No comments: Links to this post

Screenprint of the blog of "the interoperability guy" Mr. Mick Wilson. Newsblog on the SDI Developments in Nairobi, Kenya.
Jelle U. Hielkema wrote in his mail today: "... I don't know whether you have been following Mick Wilson & Co's praiseworthy no-budget, truly bottom -up SDI development efforts in Nairobi since March but a lot what he reports in his blog http://sdi-ea.blogspot.com/ is highly worthwhile reading and his most recent statement hit a few nails right on the head! "
Posted by RFG at 8:19 PM No comments: Links to this post

Crowded riverbank in front of the Parliament. Hunagi Visuals resources, 2007 One of the highlights was the spectacular Air Race over the Danube in Budapest. The flights of the four bests Mike Mangold, Kirby Chambliss, Paul Bonhomme and Péter Bessenyei were visualized and the measurements over the water surface and below the Chain Bridge were shown in cm accuracy. A collection of snapshots were taken for HUNAGI Visuals resource to be found at http://hunagi18.blogspot.com

Please note, during the past several hours www.unsdi.hu website was visited from Argentina, Australia, USA, Italy, Portugal including FAO, University of Georgia and USAID. Anyone can subscribe for the HUNAGI e-Newsletter. Simply write a request to hunagi@hunagi.hu giving your name, affiliation and e-mail.
Posted by RFG at 9:45 PM No comments: Links to this post The program will be available soon. GSDI Association will be represented by the Hungarian member of the Board, liason between GSDI and the WGISS of CEOS, the Committee on Earth Observation Systems.

You might know, the CEOS WGISS -21 and WGCV Meetings were held in Budapest arranged by EOGEO Hungary Foundation and hosted by HUNAGI in Spring, 2006. That WGISS Meeting had a Host Workshop too with active participation of many important Hungarian stakeholders (Hungarian Space Research Office, MoAgriculture and Rural Development, MoEnvironment and Water, FÖMI Institute of Geodesy, Cartography and Remote Sensing, Geological Institute of Hungary, National Meteorological Service, National Park Kiskunság, and NGOs such as Hungarian Society of Astronautics), most of them founder of the UNSDI HUCO in 2006.

Posted by RFG at 11:02 AM No comments: Links to this post

8th UNGIWG Meeting
28-30 November 2007
Bangkok, Thailand
4th UN-wide Meeting on the Use of Space Technologies for Emergency Response and Humanitarian Assistance (27 November 2007, Bangkok, Thailand -back-to-back with the 8th UNGIWG meeting 28 – 30 November 2007, Bangkok,Thailand).
Participation is limited to representatives from United Nations agencies and from organisations and institutions interested in contributing to the work of the United Nations in the area of space-based information for disaster management, emergency response and humanitarian assistance. This meeting is being organised together with UNESCAP.
Source of the news: David Stevens Programme Coordinator UN-SPIDER United Nations Office for Outer Space Affairs, Vienna - Austria. For details of the latest circular in English please visit: http://hunagi.blogspot.com/2007/08/un-spider-outreach-activities.html#links
Posted by RFG at 7:26 AM No comments: Links to this post Kick-off Meeting of eSDI-Net+
with a Hungarian Consortium represented by HUNAGI
Darmstadt, 20-21 September 2007

Chaired by HUNAGI President Zsolt Barkóczi a meeting was held in Budapest yesterday to prepare the set up the consortium which takes part in the international eContentplus project called SDI-Net+.
The Hungarian participation will be coordinated by HUNAGI, which will serve as liason with Inigraphics, the overall project coordinator. The content will be provided by VÁTI and Ihlet Public Benefit Companies, HUNAGI and Bonaventura Ltd. The Kick-off meeting will be hosted by the Fraunhofer Institut's Inigraphics in Darmstadt, Germany on 20-21 September 2007.
Posted by RFG at 3:04 PM No comments: Links to this post

UNSDI as reflected by the international press

Roger Longhorn, Editor of GEOconnexion at the 13th EC GIS/GI Workshop with the Winner of the Poster Contest. Image: HUNAGI Visuals resource, 2007 GEOconnexion published article on UNSDI in its July/August Issue
From our mail. Roger Longhorn, Editor of the GeoConnexion Journal wrote:
"Gentlemen, The UNSDI article is in the July-August issue that begins shipping today and on-line at the magazine web site www.geoconnexion.com"
The article is a contribution of Jelle Hielkema, SDI expert of the UNGIWG Secretariat.
Please note, the future of the UNSDI strategy implementation will be on the agenda of the UN UNGIWG Meeting will be held in Bangkok in November this year. Our Newsblog will inform you on any development.

Our blog was visited today among others by NASA, Massachussetts Institute of Technology, ITC, Russian Space Science, John Wiley & Sons and National University of Rwanda.
Posted by RFG at 11:19 PM No comments: Links to this post

Facilitating the Re-use of Public Sector Information in Europe .
1st Thematic Meeting : PSI re-use business with the European Associations will be held in Copenhagen on 31 August 2007
President of EUROGI and SG of HUNAGI have been invited.
For details please visit http://www.epsiplus.net/
More information: ePSIplus Meetings Coordinator Olga.McHenry@epsiplus.net
Posted by RFG at 11:29 AM No comments: Links to this post 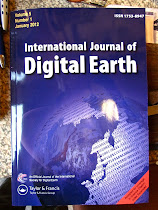